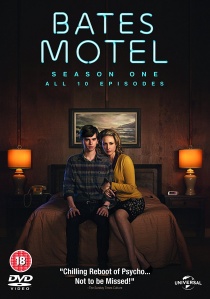 From the producers of Lost and Friday Night Lights, Academy Award nominee Vera Farmiga (Up in the Air) and Freddie Highmore (Charlie and the Chocolate Factory) star in Bates Motel: Season One, the contemporary prequel to the genre-defining film, Psycho, released on DVD and Blu-ray on 3rd February 2014, courtesy of Universal Pictures UK.

After finding his father dead, teenager Norman Bates (Freddie Highmore) and his mother, Norma (Vera Farmiga), purchase a motel and move to White Pine Bay in search of a new life, but they soon discover this idyllic seaside town hides some deadly secrets. Unable to trust anyone but each other, the two indulge in a deeply twisted relationship that raises the question: does mother really know best?

UHD
Released on DVD, Blu-ray and 4K UHD 16th September 2019 from Lionsgate Home Entertainment, super-assassin John Wick is back and on the run after killing a member of the international assassin's guild ... END_OF_DOCUMENT_TOKEN_TO_BE_REPLACED
Hot PicksView