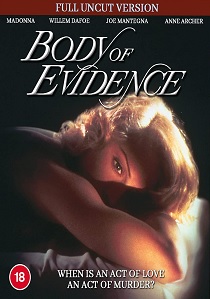 Did Rebecca Carlson (Madonna) use her body as a weapon for murder or instrument for love?

Carlson, a striking and seductive young gallery owner, stands accused of using her sexual wiles to murder her much older and very wealthy lover in order to inherit his estate. Ambitious District Attorney, Robert Garrett (Joe Mantegna), presses for a conviction and his primary witness is Joanne Braslow (Anne Archer), the victim's very devoted personal secretary who is armed with eyewitness accusations about Carlson's deviant ways.

Carlson hires Portland, Oregon's finest attorney to defend her, the aggressive and cocky Frank Dulaney (Willem Dafoe). He is a seemingly straight-laced family man taking on a case of prurient proportions. With Dulaney's powers of persuasion, Carlson has the best possible defence as the dramatic trial unfolds.

Will Dulaney be able to defend himself from the extraordinary allure of his new client? And how will his obsessive curiosity about Carlson allow him to objectively examine the body of evidence before him?

Body of Evidence is re-released on DVD and Blu-ray 30th January 2023 from Final Cut Entertainment.

HotDVDBD
From the producers of Nobody and John Wick comes a bare-knuckle, coal-dark holiday action-comedy that says you should always bet on red as Violent Night sledges in on DVD and Blu-ray 6th March 2023 from Warner Home Video. END_OF_DOCUMENT_TOKEN_TO_BE_REPLACED
Top PicksView