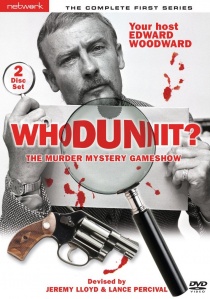 This highly popular, light-hearted panel game invited viewers to play detective every week between 1972 and 1978, pitting their wits against a panel of celebrity sleuths - hosted initially by Edward Woodward, and later by Jon Pertwee - to solve a fictitious murder mystery.

The show's brilliantly original formula, devised by comedians Lance Percival and Jeremy Lloyd (and revived in the 1990s for Cluedo), presented short dramas laden with clues to be pieced together by the panellists, who would then question the characters involved and finally point the finger at the most likely suspect; lively repartee was the order of the day.

Related Articles
There Was a Crooked Man, The Frightened City
The Wicker Man: The Final Cut, Abduction Club
Get Some In: Series 1
Doctor Who: Day of the Daleks
Comments
UHD Releases News Pick