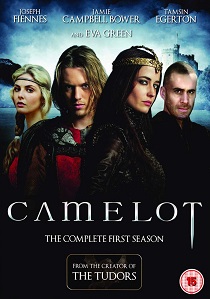 Experience the thrilling and epic legend of Camelot as never told before, when the seductive Channel 4 drama is released on DVD on 1st August 2011, courtesy of Entertainment One. Featuring an acclaimed all-star cast, Camelot is an action-packed, blood-thirsty and raunchy tale not to be missed. From Michael Hirst, creator of The Tudors and Chris Chibnall, creator of Torchwood, Camelot is packed with action, romance and betrayal.

Britain is steeped in war and deception when a young and reckless Arthur, unknown son and heir to the murdered king, is installed to the throne. His enemies, including Arthur's ruthless half-sister Morgan are quick to declare war, and the young king has to defend his kingdom with only one supporter by his side: the mysterious sorcerer Merlin...

HotDVDBD
From the producers of Nobody and John Wick comes a bare-knuckle, coal-dark holiday action-comedy that says you should always bet on red as Violent Night sledges in on DVD and Blu-ray 6th March 2023 from Warner Home Video. END_OF_DOCUMENT_TOKEN_TO_BE_REPLACED
Top PicksView