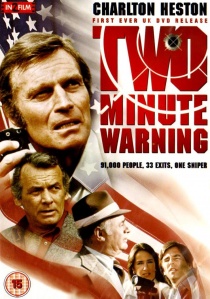 A brilliant example of edgy 1970s cinema and an oft-overlooked classic of that decade's 'disaster movie' genre, Two-Minute Warning, released on DVD by Nouveaux Pictures on 1st September 2008, is a superbly cast and brilliantly executed thriller that weaves documentary and original action footage into a compelling web of stories concerning a sympathetic array of characters, any one of whom could be the target of an unknown madman preparing to open fire on a crowd of sports fans.

Directed by Larry Peerce (Goodbye Columbus; The Incident), the film's impressive ensemble cast features a host of the era's finest actors including Charlton Heston (Earthquake; The Planet Of The Apes), John Cassavetes (The Dirty Dozen: A Woman Under The Influence), Beau Bridges (The Good German), David Janssen (The Fugitive), Jack Klugman (Quincy M.E.), Gena Rowlands (Gloria; A Woman Under The Influence), Walter Pidgeon (Funny Girl; Voyage To The Bottom Of The Sea) and Academy Award winner Martin Balsam (All The President's Men).

A championship football game is underway in front of a sell-out crowd at Los Angeles Memorial Coliseum. As the action unfolds on the field, a lone gunman, hidden high above the scoreboard, has his sights set on the unsuspecting football fans and is biding his time waiting for the moment when he can open fire on the crowd. When a TV crew covering the game spots the potential killer via a camera positioned on the Goodyear blimp, LAPD Captain Peter Holly (Charlton Heston) and SWAT Sergeant Chris Button (John Cassavetes) are called in to attempt to neutralise the sniper's threat without causing widespread panic by evacuating the stadium and alerting the public. With the clock ticking down to the game's final two-minute warning, the two men find themselves in a tense and desperate race against time to save the lives of countless innocent victims.

A taut and unsettling film that intelligently considers the nature of violence, Two-Minute Warning is also an edge-of-your-seat thriller that gradually builds to an astonishing final twenty minutes of action as fates are decided in a brutal showdown.