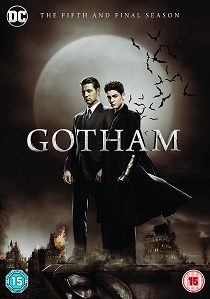 The origin story of the greatest DC Super-Villains and vigilantes, Gotham reveals an entirely new chapter that has never been told.

The fifth and final season premiere of Gotham wraps up the iconic series in a farewell event that focuses on Bruce Wayne's ultimate transformation into the Caped Crusader.

Following the events of last season, Gotham: Legend of the Dark Knight picks up with Gotham City split amongst Jim Gordon and the GCPD, and some of the most notorious fan-favorite villains, as the heroes try to gain control and salvage what's left of the deteriorating city. This season also introduces new villains, including the iconic Bane (recurring guest star Shane West).

HotBD
Combining the bio-horror elements of his earlier films whilst anticipating the technological themes of his later work, Videodrome, released on Blu-ray from a restored high-definition digital transfer by Arrow Films on 7th December 2015, exemplifies Cronenberg's extraordinary ... END_OF_DOCUMENT_TOKEN_TO_BE_REPLACED
Top PicksView