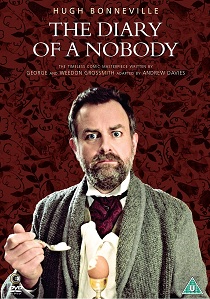 NewsTV SeriesComedyHugh BonnevilleBBC
News Article Go back to homepage
Hugh Bonneville takes on one of Victorian England's most enduring comic creations in a four-part BBC adaptation of one of Britain's most entertaining novels, The Diary of a Nobody, arriving on DVD from 12th June 2017 courtesy of Second Sight.
Hugh Bonneville
Susanna White
Murray Ferguson
Second Sight
1 hour 56 minutes
12/06/2017
#TheDiaryOfANobody
Thank you for supporting DVD365.net when you order using the link(s) below. As an Amazon Associate we earn from qualifying purchases
Buy DVD
Information

One of Britain's finest acting talents Hugh Bonneville (Downton Abbey, Paddington) takes on one of Victorian England's most enduring comic creations The Diary of a Nobody. Adapted by the peerless Andrew Davies (Pride and Prejudice, War and Peace), this witty four-part BBC adaptation of one of Britain's most entertaining novels arrives on DVD, on-demand and download on 12th June 2017 courtesy of Second Sight.

Make this your most comical Father's Day yet with an adaptation of the diary Evelyn Waugh called "the funniest book in the world".