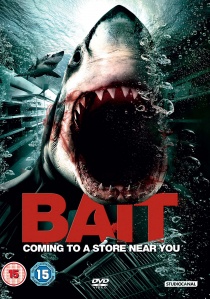 A tsunami devastates a small Gold Coast town and leaves twelve people trapped in a flooded supermarket. Amidst the horror the group slowly realises that they may not be alone. Trapped with a hungry Great White shark, how many of them will have to die and will rescue ever come?

Bait 3D is the first ever Australian 3D production and co-production between Australia and Singapore. Production companies Arclight Films, Pictures in Paradise and Story Bridge Films in Australia teamed with Blackmagic Design Films Ltd and the Media Development Authority in Singapore in association with Screen Australia and Screen Queensland.