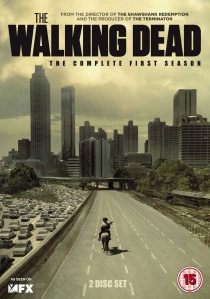 Let the feasting begin when the groundbreaking, critically acclaimed infectious series The Walking Dead: The Complete First Season is unleashed on Blu-ray and DVD on 16th May 2011 from Entertainment One. Created and directed by Academy Award® nominee Frank Darabont (The Shawshank Redemption, The Green Mile) and starring Andrew Lincoln (Love Actually, This Life), The Walking Dead: The Complete First Season on Blu-ray and DVD feeds fans' hunger with 6 action packed episodes and special features to die for.

Golden Globe® nominee for Best Television Series - Drama, The Walking Dead: The Complete First Season breathes new life into the zombie genre, as a post-apocalyptic saga that follows a group of survivors. Led by police office Rick Grimes (Lincoln), the group search for a safe haven far from the undead that now roam the city and feed on human flesh. The survivors are now faced with the everyday challenges and dangers of a world overrun by zombies, as they try to regain some semblance of a normal life.

The Walking Dead is based on the popular graphic novels by Robert Kirkman, who serves as an executive producer and writer for the series. Also starring Jon Bernthal (The Ghost, The Pacific), Sarah Wayne Callies (Prison Break, Whisper) and Laurie Holden (The Mist, Silent Hill), the action packed series not only oozes blood and gore, but tackles that question of how far would one go to survive? Dig your claws into The Walking Dead: The Complete First Season Season when it is out on Blu-ray and DVD on 16 May 2011 from Entertainment One.