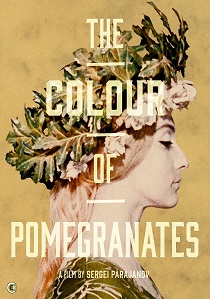 Sergei Parajanov's celebrated masterwork The Colour Of Pomegranates paints an astonishing portrait of the 18th century Armenian poet Sayat Nova, the 'King of Song' and now arrives on Blu-ray for the first time, presented in a stunning new restoration by Martin Scorsese's Film Foundation World Cinema Project and Cineteca di Bologna/L'Immagine Ritrovata laboratory, in association with the National Cinema Centre of Armenia and Gosfilmofond of Russia.

One of cinema's most revered and beautiful films this masterpiece is not a conventional biography but a cinematic expression of Sayat Nova's work, resulting in an extraordinary visual poem. Key moments in his subject's life are illustrated through a series of exquisitely orchestrated tableaux filled with rich colour and stunning iconography, each scene a celluloid painting alive with stylised movement.

Marking 50 years since the start of production, this cinematic masterpiece arrives as The Colour Of Pomegranates Limited Edition Box Set, a luxury two-disc collector's set on Blu-ray complete with a 112-page perfect-bound book, a host of brand new special features, archive material, short film, documentaries and both the Armenian and Russian versions of the film. It arrives on 19th February 2018 from Second Sight Films.

BD
Experience the thriller influenced by the astounding real-life story of the Gucci family and their unexpected legacy in House Of Gucci, available on Blu-ray and DVD 21st February 2022 from Universal Pictures (UK). END_OF_DOCUMENT_TOKEN_TO_BE_REPLACED
Top PicksView