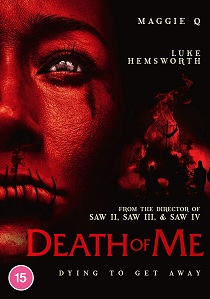 Vacationing on an island off the coast of Thailand, Christine (Maggie Q) and Neil Oliver (Luke Hemsworth) awake hungover and with no memory of the previous night. They find footage on Neil's camera, and watch, horrified, as Neil appears to murder Christine. With 24 hours until the next ferry and a typhoon threatening the island, Christine and Neil attempt to reconstruct the night's events - and are snared in a web of mystery, black magic, and murder.

With nonstop surprises and psychological thrills, Death of Me will be released on DVD 23rd November 2020 from Signature Entertainment.