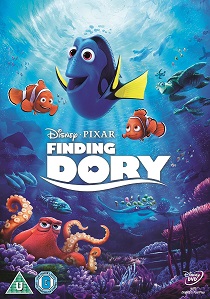 The film's playful and plentiful bonus offerings include Piper, the theatrical short film starring an irresistible sandpiper hatchling; an all-new mini short featuring interviews with Dory's pals from the Marine Life Institute; a behind-the-scenes look at the most challenging character Pixar has ever created; never-before-seen deleted scenes, including a digital exclusive featuring the Tank Gang from Finding Nemo who make it their mission to get Marlin and Nemo to the Marine Life Institute; and much, much more.

Thirteen years after the original, audiences get a new chapter in the story of their favorite forgetful blue tang. As returning director Andrew Stanton describes, "I realised that I was worried about Dory. The idea of her short-term memory loss and how it affected her was unresolved. What if she got lost again?" His response is a touching tale of friendship and family that's truly unforgettable ... perhaps even for Dory.

DVD
In Brian And Charles, released on DVD and Blu-ray 10th October 2022 from Mediumrare, an inventor lives alone in a remote village in the countryside, inventing useless things out of found objects in his garage. That is until ... END_OF_DOCUMENT_TOKEN_TO_BE_REPLACED
Top PicksView