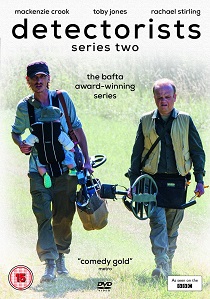 Best friends Andy (Mackenzie Crook - The Office, Pirates Of The Caribbean) and Lance (Toby Jones - The Girl, Captain America: The First Avenger) share a passion for metal detecting and spend their time scouring the English countryside, hoping for the one rare find that could change their lives forever.

Series one boasted the biggest ratings BBC Four has ever had for a comedy and now Detectorists Series Two arrives on DVD on 7th December 2015 alongside the Detectorists Complete Series One and Two box set.

The new series follows the pair one year on and Lance is still lovelorn after the departure of his ex-wife, but may be about to surprise everybody with a new and unexpected relationship.

Andy and his wife Becky are now parents, but despite qualifying as an archaeologist Andy is still unemployed and their shared hopes for the future look further off than ever - but Becky has a dream...

Meanwhile the Danebury Metal Detecting Club find themselves on a mission to track down a long WWII bomber on behalf of a young German man who suddenly arrives in their midst - followed closely by 'Simon and Garfunkel'.

UHD
From the Wachowski brothers and Joel Silver, the masterminds behind The Matrix trilogy, comes another intriguing, action-packed fantasy-thriller in V for Vendetta, released on 4K UHD 2nd November 2020 ... END_OF_DOCUMENT_TOKEN_TO_BE_REPLACED
Top PicksView