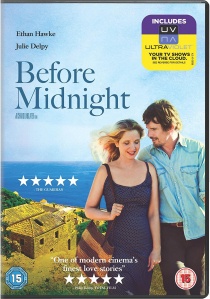 NewsDrama
News Article Go back to homepage
One of the most acclaimed and celebrated movies of the year, Before Midnight, will be available on DVD with UltraViolet on 28th October 2013, courtesy of Sony Pictures Home Entertainment.
Xenia Kalogeropoulou, Charlotte Prior, Jennifer Prior, Seamus Davey-Fitzpatrick, Julie Delpy, Ethan Hawke
Richard Linklater
Christos V. Konstantakopoulos, Kostas Kefalas, Liz Glotzer, Lelia Andronikou
Sony Pictures Home Entertainment
1 hour 49 minutes
28/10/2013
Thank you for supporting DVD365.net when you order using the link(s) below. As an Amazon Associate we earn from qualifying purchases
Buy DVD
Information

One of the most acclaimed and celebrated movies of the year, the Sony Pictures Classics romantic drama Before Midnight, will now be available on DVD with UltraViolet on 28th October 2013, courtesy of Sony Pictures Home Entertainment.

Bonus features on the DVD include commentary and a Q&A with Ethan Hawke, Julie Delpy and Director Richard Linklater, as well as the "Revisiting Jesse & Céline" featurette, taking fans behind the scenes for a look at the making of the film.

The Before... series is directed by Academy Award®-nominated Richard Linklater (2004, Best Adapted Screenplay, Before Sunset), who wrote Before Midnight with Hawke and Delpy. The film takes viewers on a roller coaster of emotions, offering a refreshingly honest and witty portrayal of what modern love really looks like in this day and age.

Jesse (Ethan Hawke) and Céline (Julie Delpy) first met in their twenties in Before Sunrise; reunited in their thirties in Before Sunset; and, now, in director Richard Linklater's amazing Before Midnight, they face the past, present and future: family, romance and love. Now on a writer's retreat in Greece, the couple looks for a night of passion, but instead their idyllic night turns into a test of their relationship and a discussion of what the future holds for them.

Related Articles
24 Hours to Live, Valerian and the City of A Thousand Planets, In a Valley of Violence, The Magnificent Seven, Maggie's Plan, Waking Life, Anarchy: Ride or Die, Good Kill, Predestination, Boyhood, What Doesn't Kill You, Sinister, The Woman In The Fifth, Booklyn's Finest, Before the Devil Knows You're Dead, Gattaca, Lord of War, Training Day, Juliet, Naked, The Kid, The Truth, Cut Throat City, Gattaca, Zeros and Ones, The Northman, The Black Phone, Boyhood, Training Day
Wiener-Dog, Waking Life, 2 Days in New York, The Air I Breathe
Waking Life, Boyhood, Fast Food Nation, Boyhood
For your consideration 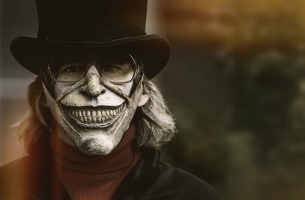 HotDVDBD
In The Black Phone, released on DVD and Blu-ray 3rd October 2022 from Warner Home Video, a teenage boy is abducted by a sadistic killer and discovers a phone in his basement cell that allows him to communicate with the killer's previous victims. END_OF_DOCUMENT_TOKEN_TO_BE_REPLACED
Comments
UHD Releases News Pick