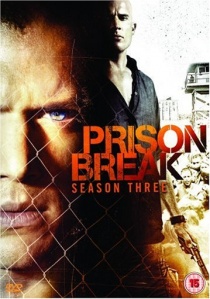 After successfully orchestrating the escape of his brother and fellow inmates from Fox River State Penitentiary, Michael (Miller) finds himself in Panama. But whilst his brother Lincoln Burrows (Purcell) is exonerated from his alleged crimes, Michael is caught and wrongly incarcerated in the terrifying Sona Federal Penitentiary for murder, along with fellow fugitives Theodore 'T-Bag' Bagwell (Knepper), Brad Bellick (Williams) and Alexander Mahone (Fichtner).

Trapped in the deadliest prison on earth with no guards, no rules and no escape Prison Break: Season 3 sees Michael and Lincoln work together to face their most dangerous challenge yet!

Special features in this Blu-Ray Box Set include an exclusive breakout episode, 13 director's takes and a special 'making of' feature from episode 1.

HotDVDBDTVBoxset
After the defeat of Eobard Thawne and his equally nefarious Legion of Doom, the Legends face a new existential threat created by their actions at the end of last season as DC Legends Of Tomorrow: Season 3 arrives on DVD and Blu-ray 24th September 2018 from Warner ... END_OF_DOCUMENT_TOKEN_TO_BE_REPLACED
Comments
BD Releases News Pick

BD
A 13-year-old girl named Meilin turns into a giant red panda whenever she gets too excited in Disney and Pixar's 25th feature film Turning Red, released on DVD, Blu-ray and 4K UHD 2nd May 2022 from Walt Disney Home ... END_OF_DOCUMENT_TOKEN_TO_BE_REPLACED
Top PicksView