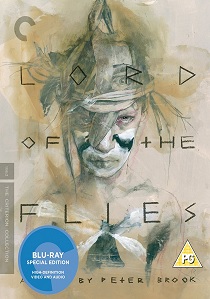 Lord of the Flies: The Criterion Collection (1963)

NewsActionDramaAdventureCriterion
News Article Go back to homepage
In a new special edition, the most indelible adaptation of the classic novel, Lord of the Flies, is given the Criterion treatment and released on Blu-ray 28th August 2017 from Sony Pictures Home Entertainment.
James Aubrey, Tom Chapin, Hugh Edwards, Roger Elwin, Tom Gaman
Peter Brook
Lewis Allen
Sony Pictures Home Entertainment
1 hour 3 minutes
28/08/2017
#LordOfTheFlies
Thank you for supporting DVD365.net when you order using the link(s) below. As an Amazon Associate we earn from qualifying purchases
Buy BD
Information

In a new special edition, the most indelible adaptation of the classic novel, Lord of the Flies, is given the Criterion treatment and released on Blu-ray 28th August 2017 from Sony Pictures Home Entertainment.

In the hands of the renowned experimental theatre director Peter Brook, William Golding's legendary novel on the primitivism lurking beneath civilization becomes a film as raw and ragged as the lost boys at its centre

Taking an innovative documentary-like approach, Brook shot Lord of the Flies with an off-the-cuff naturalism, seeming to record a spontaneous eruption of its characters' ids. The result is a rattling masterpiece, as provocative as its source material.