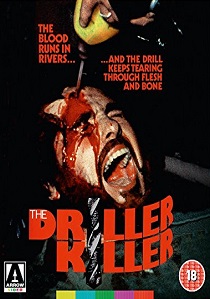 One of the most notorious of the 'video nasties', Abel Ferrara's exploitation-art-house crossover was judged almost entirely on its video artwork with the film itself left out of the equation. Now it gets the release it deserves with a stunning Limited Edition SteelBook from Arrow Video with the film fully uncut and in all its unnerving, stylish glory.

In career that has encompassed such controversial classics as Ms. 45, Bad Lieutenant and Welcome to New York, none of Abel Ferrara's films have quite managed to match the shock, extremity and downright notorious nature of The Driller Killer.

Ferrara plays struggling artist Reno, a man pushed to the edge by the economic realities of New York living in the late seventies and the No Wave band practising in the apartment below. His grip on reality soon begins to slip and he takes to stalking the streets with his power tool in search of prey...

One of the most infamous 'video nasties', in part thanks to its drill-in-head sleeve, The Driller Killer, released on dual-format DVD and Blu-ray on 28th November 2016 from Arrow Films, has lost none of its power to unnerve and is presented here fully uncut.