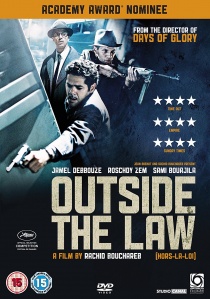 Released on DVD and Blu-Ray from Optimum Home Entertainment on 29th August 2011, director Rachid Bouchareb (Days of Glory) brings another Oscar-nominated film, Outside The Law, a thrilling post-World War II story of three brothers who become separated after losing their family home in Algeria. Messaoud (Roschdy Zem) joins the French army fighting in Indochina; Abdelkader (Sami Bouajila) becomes a leader of the Algerian independence movement in France and Saïd (Jamel Debbouze: Amelie and Angela) moves to Paris to make his fortune in the shady clubs and boxing halls of Pigalle. Gradually, their interconnecting destinies reunite them in the French capital, where freedom is a battle to be fought and won.

Rachid Bouchareb has reunited the cast from award winning Days of glory.

Outside The Law was nominated for best foreign language film at the 2011 Oscars and in competition for the Palme D'Or at the 2010 Cannes film festival.