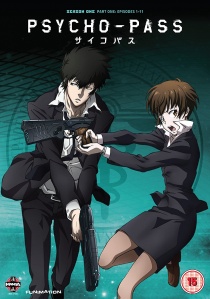 The thrilling, futuristic and gripping new crime drama Psycho-Pass, released on DVD and Blu-ray on 14th July 2014 courtesy of Manga Entertainment, is brought to you by Production I.G. (Ghost In The Shell, Blood-C, The End Of Evangelion) and echoes hard-hitting film and TV series such as Minority Report, Judge Dredd and The Tomorrow People.

Brace yourself for a hardboiled, sci-fi thriller from the creator of Madoka Magica and the studio that brought you Ghost in the Shell. Welcome to a world where just thinking about a crime is enough to enough to make you guilty. Bad intentions can no longer be hidden, and the police know exactly which tainted minds are about to cross over to the wrong side of the law.

The great equalizer in the war on thugs is the Dominator, a futuristic weapon that can read minds and assess the risk that a citizen will turn criminal. Cops work in teams made up of Enforcers and Inspectors. Enforcers take out the bad guys, Inspectors stop their partners from going rogue, and the all-powerful Sibyl System keeps a watchful eye on us all. Society is paralysed by its deepest, darkest desires, and trial by jury has been replaced by the wrath of the Dominator. Welcome to the future. How guilty are you?

DVD
For the first time in the cinematic history of Spider-Man, our friendly neighborhood hero's identity is revealed in Spider-Man: No Way Home, released on DVD, Blu-ray and 4K UHD 4th April 2022 from Sony Pictures Home ... END_OF_DOCUMENT_TOKEN_TO_BE_REPLACED
Top PicksView