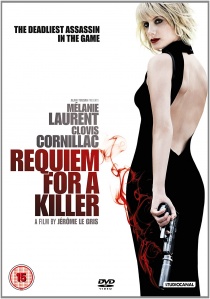 StudioCanal and The Ciné Lumière once again team up to bring quality French cinema to the UK with the 2nd July 2012 DVD release of Requiem for a Killer.

Inglorious Basterds and Beginners star Mélanie Laurent plays Lucrèce, an icy seductive hired killer, specialised in poisoning and passionate about opera. On the eve of retirement she finds herself forced to take on a highly difficult contract in the heart of the Swiss Alps by her main client (Tcheky Karyo: Special Forces).

Posing as a soprano, Lucrèce will have to perform on stage at the highly prestigious Festival D'Ermeux and try to kill one of her partners: British baritone Alexander Child (Christopher Stills). Child owns a tract of land desperately wanted by a British oil firm. He remains the only obstacle to a strategic pipeline project with considerable economic potential and so needs to be eliminated.

To complicate the contract even more, French counter-intelligence learns of the hit and sends Rico (Clovis Cornillac: A Very Long Engagement, Asterix at the Olympic Games), a reinstated former agent, to infiltrate the orchestra, unmask and terminate the potential assassin.

To the rhythm of Handel's sublime Mass, a gripping three-way chase ensues as Lucrece's contract is revoked after a failed attempt to kill Child and a further killer enters the mix to eliminate both her and the original target. The directorial debut for Jérôme Le Gris, Requiem For A Killer is a poised assassination thriller loaded with high heels and high tension.