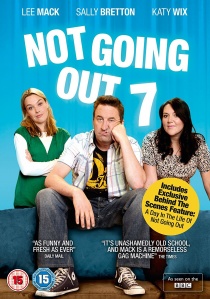 Written by and starring Lee Mack (the British Comedy Award and BAFTA winning comedian), series seven of this hit sitcom continues to follow the hilariously ill-thought-out plans and mishaps of Lee as he desperately tries to impress long suffering landlady and object of his affection, Lucy (Sally Bretton). As ever, uber-ditzy friend Daisy (Katy Wix) is on hand to offer her usually unsolicited and always completely unique take on events, while Lee's dad (Bobby Ball) and Lucy's parents only ever seem to result in him further tying himself in ever-more-complicated knots.

This series also introduces new neighbours Toby (Hugh Dennis) and Anna (Abigail Cruttenden), a well-heeled couple who soon experience that when sharing a building with Lee and Lucy things are anything but straightforward.

The will-they-won't-they tension between Lee and Sally reaches unseen new heights in an epic series finale, that sees Lucy and Lee in previously uncharted emotional water. Will they, or wont they... the time has come to finally find out.

The seventh and final series of the award-winning BBC sitcom Not Going Out is released on DVD by Universal Pictures (UK) on 1st June 2015.