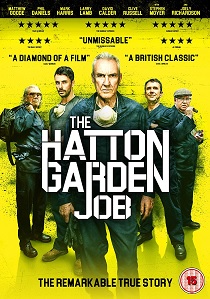 An all-star cast prove that there really is life to be found in some old dogs as the real-life heist of the century becomes the most anticipated British film of the year when The Hatton Garden Job arrives on DVD and Blu-ray on 12th June 2017, courtesy of Signature Entertainment.

A remarkable true story set over one long Easter weekend; The Hatton Garden Job follows four ageing East End criminals - led by 76 year-old Brian Reader - and one mystery man who pull off the largest heist in English legal history. With everyone from the Hungarian mob to Scotland Yard on their tail, these old-school - and just plain old - villains set about achieving the seemingly impossible, drilling into a steel-and-concrete secured safety deposit vault in London's well-to-do Hatton Garden jewellery quarter. But will they commit the crime of the century or pay with their lives?

The crime romp of the year, The Hatton Garden Job proves once and for all that crime doesn't pay when you're on a pension.

DVD
Arriving on DVD and Blu-ray 24th May 2021 from Acorn Media (UK), the hit police corruption drama from the makers of Bodyguard returns as Series Six of Line of Duty sees AC-12 facing their most ... END_OF_DOCUMENT_TOKEN_TO_BE_REPLACED
Hot PicksView