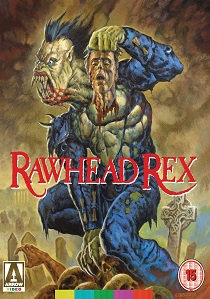 Adapted for the screen by acclaimed horror writer Clive Barker (Hellraiser, Nightbreed) from his short story of the same name, Rawhead Rex sees a hulking, ancient demon tearing a bloody swathe across the Irish countryside.

When an unsuspecting farmer pulls up a stone column embedded in a barren field, he accidentally unleashes hell by freeing Rawhead Rex - a hulking monster that has been trapped there for thousands of years. With the seemingly unstoppable demon rampaging through the local village, American historian Howard Hallenbeck is faced with the task of putting Rawhead back in the ground for good.

The first of several films to be adapted from Barker's seminal Books of Blood series, Rawhead Rex has garnered a strong cult following over the years - now clawing its way to the surface in a stunning new 4K restoration from the original camera negative.

Rawhead Rex is released on Blu-ray 14th May 2018 from Arrow Video.

DVD
Two lifelong friends find themselves at an impasse when one abruptly ends their relationship, with alarming consequences for both of them in The Banshees Of Inisherin, released on DVD and Blu-ray 30th January 2023 from Walt ... END_OF_DOCUMENT_TOKEN_TO_BE_REPLACED
Top PicksView