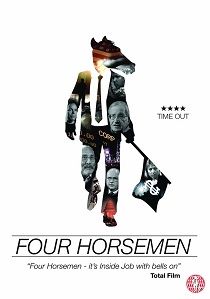 NewsDrama
News Article Go back to homepage
Four Horsemen is a cinematic feature documentary that lifts the lid on how the global economy really works. Released on DVD by Guerilla Films from 2nd April 2012, this is essential viewing for anyone seeking to investigate how and why the current system has failed.
Noam Chomsky, John Perkins, David Morgan, Lawrence Wilkerson, Gillian Tett, Dominic Frisby
Ross Ashcroft
Jason Whitmore, Ross Ashcroft, Megan Ashcroft
Guerilla Films
1 hour 37 minutes
02/04/2012
Thank you for supporting DVD365.net when you order using the link(s) below. As an Amazon Associate we earn from qualifying purchases
Buy DVD
Information

Four Horsemen is a cinematic feature documentary that lifts the lid on how the global economy really works. Released on DVD by Guerilla Films from 2nd April 2012, this is essential viewing for anyone seeking to investigate how and why the current system has failed.

After the greatest financial heist in history, the modern day 'Four Horsemen Of The Apocalypse' continue to ride roughshod over the people whom can least afford it. One - a rapacious financial system, Two - escalating organized violence, Three - abject poverty for billions and Four - exhaustion of the earth's resources, gallop unchallenged because we are not encouraged to question the accepted norms.

Consumerism has put us on an unhappy crash course for disaster and many people, perhaps even the majority of people, sense innately that something is wrong. Arguably, almost everyone is now at the end of the benefits of economic growth and younger generations are facing a future without the opportunities or the quality of life enjoyed by generations passed.

Understanding that we will never return to 'business as usual', filmmakers Ross Ashcroft (Writer/Director) and Megan Ashcroft (Producer) decided to do something and Four Horsemen is the result - a documentary feature, made out of outrage, out of incredulity, out of necessity.

Why with all the knowledge and technology in the world do we fail to distribute wealth fairly? How can we live in a society that benefits the few at the expense of the many? Is it because of us, or is it actually something more systemic? Four Horsemen seeks to answer these kinds of questions and strips away all the complex language and terminology from our banking and economic practices to show how simple it really is.

Four Horsemen brings together for the first time interviews with 23 global thinkers - many of whom have been marginalised - to break their silence and explain how the world really works. Leading experts such as Noam Chomsky, Gillian Tett, Philip Blond, Richard Wilkinson, Camilla Batmanghelidjh explain exactly what's going on and where we go from here. Four Horsemen doesn't get involved in banker bashing, criticising politicians or conspiracy theories. The film puts the entire system up for discussion and ultimately ignites a debate about the ways we could change it.

Four Horsemen is an independent, self funded and employee owned film. The young team of filmmakers made it so we could begin to think about ushering a new economic paradigm into the world that would dramatically improve the quality of lives across all countries. The filmmakers believe that Four Horsemen will have succeeded if, in a decade, the idea of running our economies as we do today seems nothing short of tyrannous.