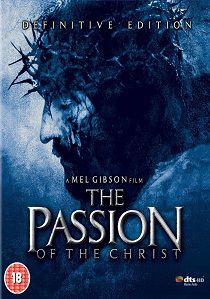 Experience one of cinema's most intensely powerful films in high-definition as the Definitive Edition of Academy Award winning director Mel Gibson's The Passion Of The Christ comes to Blu-Ray for the first time ever on 22nd March 2010, from Icon Home Entertainment.

The Passion Of The Christ is a triumphant and uncompromising filmmaking achievement from Mel Gibson (The Man Without a Face, Braveheart, Apocalypto) that features stunning cinematography and an inspired performance by James Caviezel (The Count of Monte Cristo, Deja Vu, Outlander) as Jesus Christ. Soon to be seen in the new re-imagining of The Prisoner on ITV1, Caviezel is joined by Monica Bellucci (The Matrix Trilogy) as Magdalen.

Released as both a two-disc special edition Blu-ray or DVD Definitive Edition set, The Passion Of The Christ is beautifully shot with amazing colours making this visual masterpiece picture perfect on blu-ray and gives the viewer a more intense experience than ever before. The film picked up 17 awards including the People's Choice Award for Favourite Movie Drama and thirteen further nominations including three for the Academy Awards. A box office phenomenon and equally controversial, the film's Aramaic, Latin and Hebrew dialogue makes it the highest grossing non-English language film in history. This profound story of courage and sacrifice depicts the final twelve hours in the life of Jesus Christ (Caviezel).

The film begins in the Garden of Gethsemane where Jesus has gone to pray after sitting the Last Supper where he must resist the temptations of Satan. Betrayed by Judas Iscariot, Jesus is then arrested and taken within the city walls of Jerusalem where leaders of the Pharisees confront him with accusations of blasphemy and his trial results in a condemnation to death by crucifixion.

This feast for the eyes two-disc set is loaded with special features including; two versions of the film, the original theatrical version and a version edited for graphic depictions, making of featurette, deleted scenes, audio commentaries and enhanced viewing material plus much more.

UHD
A 13-year-old girl named Meilin turns into a giant red panda whenever she gets too excited in Disney and Pixar's 25th feature film Turning Red, released on DVD, Blu-ray and 4K UHD 2nd May 2022 from Walt Disney Home ... END_OF_DOCUMENT_TOKEN_TO_BE_REPLACED
Top PicksView