Following the unparalleled success of Deutschland '83 and Deutschland '86, which critics hailed as the start of a golden age for German TV, comes the hugely anticipated third instalment of the gripping series, Deutschland '89. Alongside programmes like the much-lauded Babylon Berlin, a fourth series of which is in the making, the timing is perfect for the next instalment of this cool, super stylish thriller. It is set to arrive on digital from 24 April 2021 and on DVD on 26th April 2021 from Acorn Media International alongside a stunning Deutschland '83, '86 & '89 Complete DVD Box Set.

Deutschland '89 takes us to the era-defining fall of the Berlin Wall on 9 November 1989 and the return of superspy Martin Rauch (Jonas Nay - Line of Separation) who must deal with the consequences it brings. The peaceful revolution has thrown his world into turmoil. He and his fellow agents at the HVA (East German Foreign Intelligence) are reeling. Their government has collapsed, their organisation is in chaos and their futures are uncertain, at best. How to play the next hand? Join Big Brother at the KGB? Go West and work for an enemy agency? Use international contacts to begin a new career? Or run off to paradise with hoarded gold? Our heroes need to reinvent themselves in the face of a new world order.

Deutschland '83 saw UK viewing figures in excess of 2.5 million, exceeding that of the seminal Nordic noir hit The Killing and putting Germany at the forefront of must watch television. This epic coming-of-age story is set against real events, culture wars and the political realities of Germany in the early 1980s and sees Jonas Nay (Line of Separation) as a spy at the centre of this suspenseful Cold War thriller. The series also features an era defining 1980s pop soundtrack that hits all the right nostalgic buttons (99 Red Balloons anyone?).

Deutschland '86 catapults audiences into the tumultuous political landscape of 80s East Germany. We join Martin Rauch (Nay) in 1986 and East Germany is broken, Perestroika is real, terrorism plagues Europe, the AIDS crisis intensifies and the struggle against apartheid rages on. Banished for his sins in 1983, Rauch wallows in limbo until his Aunt Lenora (Maria Schrader - Aimee & Jaguar, The City and the City) conscripts him into her plan to drum up hard currency abroad. They set off on an adventure through Africa, Western Europe and finally home to East Germany. Can Mafioso-style capitalism save communism just in the nick of time?

Experience a seminal historical event, along with the style, sounds and politics at the end of a memorable decade, through the eyes of a superspy in the riveting Deutschland '89 and revisit Martin Rauch's journey up the ranks in Deutschland '83, '86 & '89 Complete DVD Box Set. 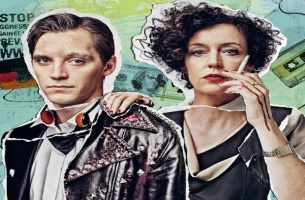 HotDVD
Following the unparalleled success of the first series Deutschland '83, which critics hailed as the start of a golden age for German TV, the hugely anticipated Deutschland '86 is set to arrive on DVD on 13th May 2019 from Acorn Media International. END_OF_DOCUMENT_TOKEN_TO_BE_REPLACED
Comments
UHD Releases News Pick