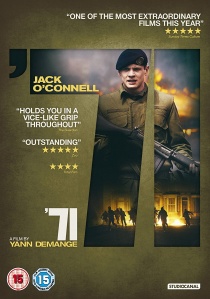 When their first mission sparks a riot, Gary is accidentally abandoned by his unit in the frenzy. Unable to tell friend from foe, the raw recruit must survive the night and find his way back to base through a disorientating, alien and deadly landscape.

HotDVDBDUHD
Yet to fulfill their rock and roll destiny, the now middle aged best friends set out on a new adventure when a visitor from the future warns them that only their song can save life as we know it as Bill & Ted Face The Music is released on DVD, Blu-ray and 4K UHD 25th January 2021 from Warner Home Video. END_OF_DOCUMENT_TOKEN_TO_BE_REPLACED
Hot PicksView