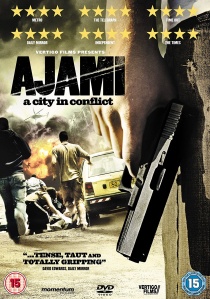 Get ready for a melting pot of emotions and cultures as the critically acclaimed and award-laden Ajami, comes to DVD on 14th February 2011 courtesy of Momentum Pictures. Set in Jaffa's Ajami neighbourhood, a town full of conflicting views among Jews, Muslims and Christians, Ajami pulls together five different stories all told by a non-professional acting cast. Ajami is written and directed by first time filmmaker Scandar Copti whose filmmaking has been compared to both Amores Perros and City of God.

The film's narrator is sensitive 13-year-old Nasri. He and his older brother Omar live in fear when their entire family is left in danger after their uncle foolishly wounds a prominent clan member. The four other protagonists of the story are naive young Palestinian refugee Malek, who works illegally in Israel to help finance the surgery that will save his mother's life; affluent Palestinian Binj who dreams of a bright future with his Jewish girlfriend, and Jewish policeman Dando who becomes obsessed with revenge when his brother is found dead in the West Bank.

Ajami weaves a time-fractured story of drug-dealing, romance and economic survival, immersing the audience into the everyday violence of life in Israel. The film's release on DVD gives 2011 its first essential film of the year and one that, once viewed, is never forgotten.

BD
In The Black Phone, released on DVD and Blu-ray 3rd October 2022 from Warner Home Video, a teenage boy is abducted by a sadistic killer and discovers a phone in his basement cell that allows him to communicate with the killer ... END_OF_DOCUMENT_TOKEN_TO_BE_REPLACED
Top PicksView