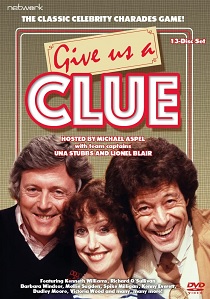 Una Stubbs and Lionel Blair captain two teams of celebrities in this light-hearted battle of the sexes! Hosted by Michael Aspel, each contestant has two minutes to get their teammates to guess their mime - otherwise it's thrown open to the other team for a bonus point!

This classic celebrity charades game is released on DVD 28th November 2022 from Network.

HotDVDBDTV
DCI Tom Brannick returns, as the murder of a crooked accountant unravels a trail of greed that threatens to expose the true identity of the legendary assassin, codenamed, Goliath in Bloodlands: Series 2 released on DVD and Blu-ray 14th November 2022 from Dazzler Media. END_OF_DOCUMENT_TOKEN_TO_BE_REPLACED
Top PicksView