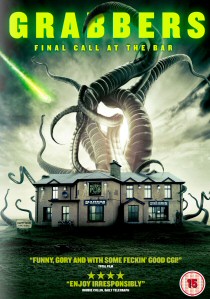 Strange things are afoot on Erin Island and it's down to the charming but heavy-drinking Garda Ciarán O'Shea (Richard Coyle, Pusher, Prince of Persia: The Sands of Time) and his enthusiastic new recruit, Garda Lisa Nolan, (Ruth Bradley, Flyboys, TV's Primeval) to investigate. Soon it becomes clear that there's something big out there and that it's hungry. It's time to rally the villagers, arm the troops... and head to the pub.

The DVD is packed with bonus materials, including a filmmaker's commentary, behind-the-scenes featurette, an interview with director Jon Wright, outtakes and photo gallery.

The sleepy coastal community of Erin Island is about to receive some unexpected visitors. Vicious extra terrestrial predators have landed and they've got a thirst on.... for blood. With razor sharp tentacles and an insatiable hunger, the alien creatures are about to indulge in a feeding frenzy the likes of which has never been seen before. With a storm fast approaching and with no means of escape, the townsfolk have one last shot at survival. Will the locals find enough Dutch courage to survive The Grabbers?

Grabbers was directed by Jon Wright and written by Kevin Lehane. It has a running time of approx 94 minutes and is rated 15. Grabbers is a Forward Films Production in association with Samson Films and High Treason Productions and with Nvizible and The Salt Company made with the support of Bord Scannán na hÉireann/Irish Film Board, Northern Ireland Screen and The British Film Institute.

UHD
One of the most compelling and conflicted characters in Sony Pictures Universe of Marvel Characters comes to the big screen as Jared Leto transforms into the antihero Michael Morbius as Morbius is released on 4K Ultra HD, Blu ... END_OF_DOCUMENT_TOKEN_TO_BE_REPLACED
Top PicksView