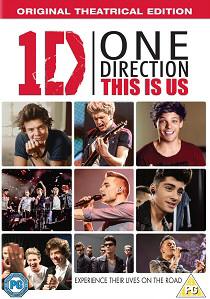 Follow international pop sensation One Direction from their humble hometown beginnings to the global phenomenon in One Direction: This is Us, arriving in an "Ultimate Fan Edition" coming to Blu-ray 3D, Blu-ray and DVD with UltraViolet on 19th December 2013 from Sony Pictures Home Entertainment. Also available in 3D format, the special edition Blu-ray release features both original theatrical and extended fan cuts of the feature film. The extended cut includes 20 minutes of new footage and four additional songs for fans to treasure.

As MTV's 2012 Artist of the Year, Academy Award nominated director Morgan Spurlock (Best Documentary, Super Size Me, 2004) and producer Simon Cowell (TV's The X Factor) give fans a captivating and intimate, all-access look at the journey of One Direction, chronicling the group's almost immediate rise to superstardom. Never-before-seen footage from the "Ultimate Fan Edition" includes three exclusive featurettes with behind-the-scenes footage of Niall, Zayn, Liam, Harry and Louis having fun at a radio station in Japan and paying a visit to Madame Tussauds wax museum to experience their own sculptures being created.

This edition will also feature "Up All Night" - two mini movies previously only seen at the live concert. One Direction: This is Us comes with extended scenes and seven featurettes where fans will have the opportunity to go backstage with the group as they prepare for one of their biggest performances of the year and follow them on visits back to their hometowns with the cameras rolling. Also included is the Music Video for fan-favourite "Best Song Ever", the lead single from the group's new album Midnight Memories, released globally on November 25th.

One Direction: This is Us will also be available on single-disc DVD featuring the original theatrical version of the film along with select featurettes from the "Ultimate Fan Edition".

One Direction: This is Us is a captivating and intimate all-access look at life on the road for the global music phenomenon. Weaved with stunning live concert footage, this inspiring feature film tells the remarkable story of Niall, Zayn, Liam, Harry and Louis' meteoric rise to fame, from their humble hometown beginnings and competing on The X-Factor, to conquering the world and performing at London's famed O2 Arena. Hear it from the boys themselves and see through their own eyes what it's really like to be One Direction.

One Direction: This is Us was directed by Morgan Spurlock. The film was executive produced by Richard Griffiths, Harry Magee, Will Bloomfield, Douglas C. Merrfield, Jeremy Chilnick, Matthew Galkin, with Simon Cowell, Adam Milano, Morgan Spurlock and Ben Winston serving as producers.

DVD
An intimate and moving story of childhood memories, Belfast is available to own on Blu-ray and DVD 25th April 2022 from Universal Pictures (UK). END_OF_DOCUMENT_TOKEN_TO_BE_REPLACED
Top PicksView