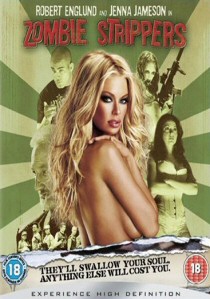 Sexy, blood-thirsty and riotous, Zombie Strippers is released to buy on Blu-ray and DVD and to rent on DVD from the 13th October 2008, courtesy of Sony Pictures Home Entertainment.

When a secret government agency lets out a deadly chemo-virus that causes the dead to reanimate, the first place to get hit is Rhino's, a hot underground strip club. As one of the girls gets the virus, she turns into a supernatural flesh-eating zombie stripper, making her the hit of the club. Jealous of her success, can the rest of the girls fight the temptation to be like the ravenous stripper, even if there is no turning back?