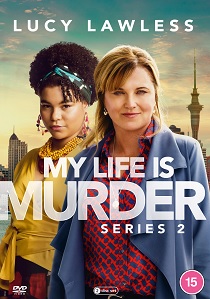 Award-Winning actor and screen favourite Lucy Lawless returns for the second series one of Australia's most popular crime dramas My Life is Murder. This entertaining crime drama premiered exclusively on Acorn TV, and following its TX on Alibi this August, My Life is Murder: Series 2 is set to arrive on DVD, and digital, alongside My Life is Murder Complete Series 1 - 2 Box set on 10th October 2022, courtesy of Acorn Media International.

Renewed for a third season, it's the perfect time to catch up with ex-cop turned detective Alexa Crowe (Lucy Lawless - Xena: Warrior Princess, Parks and Recreation). This series sees her return to her New Zealand hometown after years living in Australia where she's called upon to investigate puzzling murders by series newcomer - charismatic DI Harry Henare (Rawiri Jobe - The Brokenwood Mysteries).

Alexa is once again joined in Auckland her partner-in-crime-solving, Madison Feliciano (Ebony Vagulans - To Be, The Heart Guy) who's closer than ever to her mentor - quite literally, as she winds up living in Alexa's apartment. But to truly make a fresh start, Alexa must deal with the family troubles she's avoided for decades, starting with her wayward brother...

This series finds Lucy investigating the death of a drag queen, a museum curator's murder, the mysterious demise of an ambitious young winemaker and a very cold case of a chef found dead in his walk-in freezer. Can she endure a survival expert murder case and help in the death of a self-help guru?

In Series 1 we say hello to Alexa, who is tenacious and unapologetic and brings her dry wit and brash style as she contends with a suspicious death at a competitive culinary school, a murder in an exclusive cycling club, a locked-room mystery, and more.

Settle down for a murder mystery adventure that promises sharp wit, charming characters, and plenty of drama with My Life is Murder: Series 2.

BD
In Brian And Charles, released on DVD and Blu-ray 10th October 2022 from Mediumrare, an inventor lives alone in a remote village in the countryside, inventing useless things out of found objects in his garage. That is until ... END_OF_DOCUMENT_TOKEN_TO_BE_REPLACED
Top PicksView