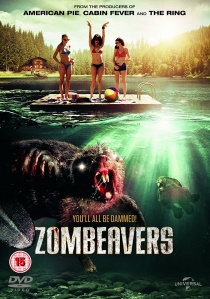 From the producers of American Pie, Cabin Fever and The Ring comes Zombeavers; the hilarious no-holds-barred schlock horror, released on Blu-ray and 20th October 2014, courtesy of Universal Pictures (UK).

Announced earlier this year at the Berlin Film Festival, it garnered over 2 million trailer views and became quite the social media and festival sensation. Zombeavers is the horror comedy not to be missed with hysterical interludes, gross-out gore and old school animatronics that will have audiences on the edge of their seats.

Making its highly anticipated UK debut at Film4 FrightFest on Thursday 21st August at the Vue West End cinema, Leicester Square, London, the UK Premiere will be the first opportunity fans will have to see Zombeavers on the big screen ahead of its home entertainment release.

The film follows a group of college students headed out into the wilderness for spring break, unaware of the danger that lurks beneath the lake. Unbeknownst to the vacationers a chemical spill has irreversibly altered the wildlife and Zombeavers are on the prowl. As a weekend of sex, drugs and debauchery gets underway, the beavers close in on their prey and the bloodthirsty beasts really do take the term 'killer weekend' to the next level.

Find laughs and scares in equal measure as zombie beavers prepare for attack; enjoy Zombeavers from the comfort of your own home on Blu-ray or DVD.

"We can not turn against each other right now. That's EXACTLY what the beavers would want!"

BD
After more than thirty years of service as one of the Navy's top aviators, Pete 'Maverick' Mitchell is back where he belongs as Top Gun: Maverick flies onto DVD, Blu-ray and 4K UHD 31st October 2022 from Paramount Home ... END_OF_DOCUMENT_TOKEN_TO_BE_REPLACED
Top PicksView