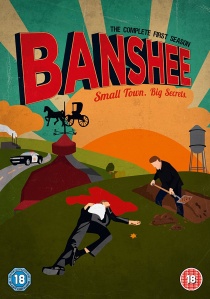 From the award-winning creator of True Blood, comes the violent, intense and sexy Banshee, released on Blu-ray, DVD and available to own and watch instantly via blinkbox on 2nd September 2013, courtesy of HBO Home Entertainment.

Created by Emmy® and Oscar® winner Alan Ball (True Blood, American Beauty), this action series features explosive action stunts that wouldn't be out of place in a blockbuster movie. The story follows a recently paroled master thief who assumes the identity of the Sheriff of Banshee, Lucas Hood (Antony Starr). Reconnecting with his one-time lover and partner-in-crime, Lucas attempts to avoid the gangsters they both betrayed years earlier.

Set in a small town in Pennsylvania, Hood learns that his past lover, Anastasia (Ivana Milicevic), is now a married mother of two living under the assumed identity of Carrie Hopewell. Banshee sees Lucas Hood struggle with adapting to his new identity while dealing with the machinations of local crime lord Kai Proctor, and remaining hidden from his arch nemesis from his past, 'Rabbit'.

Banshee: Season One is out on DVD and Blu-ray from 2nd September 2013, courtesy of HBO Home Entertainment and will be available to own and watch instantly via blinkbox on the same day.