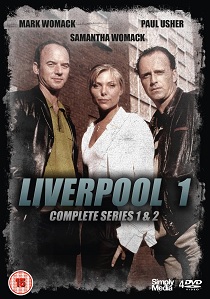 NewsTV SeriesDrama
News Article Go back to homepage
Liverpool 1, coming to DVD for the first time in the UK on 25th July 2016 thanks to Simply Media, is the gritty drama that originally aired on ITV in the late 1990s, from BAFTA award-winning directors Ken Horn and Terry McDonough.
Samantha Janus, Mark Womack, Samantha Womack, Leslie Phillips, Scot Williams
Ken Horn, Terry McDonough
Simply Media
12 hours 0 minutes
25/07/2016
#Liverpool1
Thank you for supporting DVD365.net when you order using the link(s) below. As an Amazon Associate we earn from qualifying purchases
Buy DVD
Information

Liverpool 1 is a gritty drama that originally aired on ITV in the late 1990s, from BAFTA award-winning directors Ken Horn and Terry McDonough. Starring a wealth of great British acting talent including Samantha Womack (Eastenders, Game On), Scot Williams (Mersey Beat, Meadowlands) and Mark Womack (Murphy's Law, Babylon) and featuring the inimitable Carry On favourite Leslie Phillips CBE, it comes to DVD for the first time in the UK thanks to Simply Media.

DC Isobel de Pauli has taken on a new job, in a new city where she soon discovers she is a stranger to the ancient, hidden connections that tie Liverpool's criminals together... and its cops. On arrival she comes face to face with John Sullivan, the city's most charismatic and influential crime boss. He's as fascinated by her as she is by him-but Sullivan is the least of her worries.

Her new partner, the silent and indistinctive DC Mark Callaghan, knows this world inside out ­- and he's doing everything in his power to shut de Pauli out of it. Callaghan is the subject of an internal police investigation, and de Pauli has some serious suspicions about his links to Liverpool's criminal underworld.

This uncompromising drama pits cops versus criminals, but who is on whose side? Liverpool 1: Complete Series 1 and 2 comes to DVD as a bumper 4-disc set on 25th July 2016.

HotUHD
A decade-defining classic from the imagination of Steven Spielberg and Chris Columbus, celebrating its 35 year anniversary, The Goonies is released on 4K UHD 31st August 2020 from Warner Home Video. END_OF_DOCUMENT_TOKEN_TO_BE_REPLACED
Top PicksView