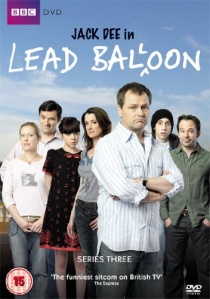 Jack Dee returns as failed stand-up and serial liar Rick Spleen - a man who can deal with any situation ... badly - in the highly anticipated DVD release of the third series of critically acclaimed comedy Lead Balloon. Out on 6th June 2011 and released by 2entertain, Lead Balloon Series 3 features all seven episodes in their entirety including an extended Christmas special.

Series 3 sees Rick's career reach such dizzy heights as hosting the National Tyre Fitters Awards, presenting a safety video for Scuba Diving Gear, and guesting on a late-night phone-in on Rumour FM, where he fails to inspire a single call from the listeners.

A near-death experience turns out to be the least of his problems. He manages to record the worst score of all time on a much-loved radio panel show, and when his real name is revealed on a TV show about family trees, any remaining pride is well and truly lost.

Not everything is a bed of roses on the domestic front either. Mel is forced to run her agency from home while the office is being done up; Magda moves in 'temporarily' while her boiler is being fixed; and the relationship between Rick's daughter Sam, and her slacker boyfriend Ben hits the rocks - but can either of them actually be bothered to save it?

The series culminates in a 40 minute Christmas Special, which sees Rick in a challenging new acting role - well, alright, it's the part of Mr Smee in a panto. For Rick Spleen, as always, it's onwards and downwards...

UHD
Based on the bestselling comic book, Vin Diesel stars as Ray Garrison, a soldier recently killed in action and brought back to life as the superhero Bloodshot, available 8th June 2020 from Sony ... END_OF_DOCUMENT_TOKEN_TO_BE_REPLACED
Top PicksView