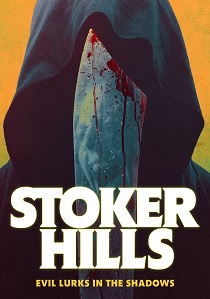 Enter Stoker Hills at your own risk...where evil lurks in the shadows, in this nightmare-fuelled horror. The darkly enthralling new feature from director Benjamin Louis (State's Evidence) is set to have UK audiences on the edge of their seats, or firmly behind the sofa when it gets it debut on digital from 101 Films on 28th March 2022.

Three college students, Ryan (David Gridley - Lady Driver), Erica (Steffani Brass - Six Feet Under) and Jake (Vince Hill-Bedford - American Fighter) set out to make a horror movie in their isolated small-town, but their film quickly takes a deadly turn, and they find themselves plunged into a hellish nightmare - something way more chilling than they could ever have imagined.

When two detectives find footage of the students' abduction, they must delve into the terrifying tapes and look for clues to save the missing trio before it's too late. The investigation leads them to the outskirts of Stoker Hills where they find an unimaginable hell.

This tense chiller promises dark and deadly thrills, a tasty turn from horror legend Tony Todd aka The Candyman, and a wicked twist in its tail.

Dare you take a trip to Stoker Hills?

HotUHD
After moving to a new town, two brothers discover that the area is a haven for vampires as the classic The Lost Boys is released on 4K UHD 20th September 2022 from Warner Home Video. END_OF_DOCUMENT_TOKEN_TO_BE_REPLACED
Top PicksView