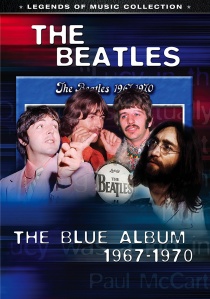 The Beatles - Blue Album, released on DVD by Kaleidoscope Home Entertainment on 15th April 2013, is a fascinating critical review of the ground-breaking Beatles compilation album.

The Beatles Blue Album gathered together some of the most influential, ground-breaking rock music ever recorded and placed it on one irresistible collection. Released at a time when compilation albums were less common, the Blue Album set the standard; it was a perfect record of the Beatles' unmatched creativity and diversity, a showcase for their songwriting brilliance and peerless musicianship.

This unique critical review of a landmark album brings together a host of musicians, industry figures and respected rock journalists to analyse the extraordinary music on the Blue Album, among them Chris Welch, Nick Tauber and Adam Clayson.

Their penetrating insights are placed alongside highlights of superb Beatles' performances of such songs as Strawberry Fields Forever, Lucy In The Sky With Diamonds, I Am The Walrus, Hey Jude, Let It Be, Something, Revolution, Sgt Pepper's Lonely Hearts Club Band, When I'm Sixty Four, Hello Goodbye and All You Need Is Love, making this an indispensable addition to any DVD collection.

DVD
One of the most compelling and conflicted characters in Sony Pictures Universe of Marvel Characters comes to the big screen as Jared Leto transforms into the antihero Michael Morbius as Morbius is released on 4K Ultra HD, Blu ... END_OF_DOCUMENT_TOKEN_TO_BE_REPLACED
Top PicksView