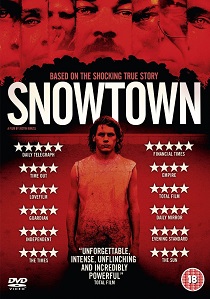 Revolver Entertainment is pleased to announce the 30th March 2012 UK Blu-Ray & DVD release of Snowtown - one of the most gripping, harrowing and disturbing films ever to come out of Australia.

From first-time director Justin Kurzel, Snowtown marks the arrival of a major new filmmaking talent. A nail-biting, emotionally compelling and a psychologically devastating account of real-life murders, Snowtown documents the true-story of John Bunting - Australia's most notorious serial killer. Set in Adelaide, Southern Australia during the late 1990s, Bunting rallies against a nonchalant police force where paedophiles and drug addicts are free to roam the streets. Bunting takes on the role as an unsolicited vigilante for the under-classes by taking the law into his own hands and sets off on a killing spree.

Originally a native of Brisbane, Queensland, Bunting is currently serving eleven consecutive sentences of life imprisonment without the possibility of parole, for his role in the killing of 11 victims, now referred to as the "Snowtown murders". Bunting was the ringleader of what is described as a "degenerate sub-culture" of murderers. His crimes led to the longest and most expensive investigation and criminal trials in Australia's history. Bunting's targets consisted primarily of people he knew and thought to be paedophiles and homosexuals. He has been described as a skilled manipulator of people and "Australia's worst serial killer".

With an outstanding cast, made-up almost completely of newcomers, Snowtown has mesmerised viewers and critics alike. The film was honoured with the prestigious Adelaide Film Festival's Audience Award, was given the President's Special Mention at Cannes and was officially selected for the 2011 London Film Festival.

Sixteen-year-old Jamie (Lucas Pittaway) lives with his mother, Elizabeth and two younger brothers in a housing trust home in Adelaide's northern suburbs. Their home is but one of many sun-starved houses crammed together to cater for a disenfranchised society. Jamie longs for an escape from the violence and hopelessness that surrounds him and his salvation arrives in the form of John (Daniel Henshall), a charismatic father figure who unexpectedly comes to his aid.

As John spends more and more time with Jamie's family, Elizabeth and her boys begin to experience a stability and sense of family that they have never known. John moves from the role of Jamie's protector to that of his mentor, indoctrinating Jamie into a world brimming with bigotry, righteousness and malice. Like a son mimicking his father, Jamie soon begins to take on some of John's traits and beliefs as he spends more and more time with him and his select group of friends. The protection and guidance that John presents to Jamie is initially welcomed however as events occur around him, including the disappearance of several people, Jamie begins to harbour deep suspicions about John and his motivations.

When the truth is finally revealed to Jamie, his hopes of happiness are threatened by both his loyalty for and fear of, his new found father figure, John Bunting - Australia's most prolific and dangerous serial killer.

BD
An expert cutter must outwit a dangerous group of mobsters in order to survive a fateful night in The Outfit, released 1st August 2022 on DVD, Blu-ray and 4K UHD from Dazzler Media. END_OF_DOCUMENT_TOKEN_TO_BE_REPLACED
Top PicksView