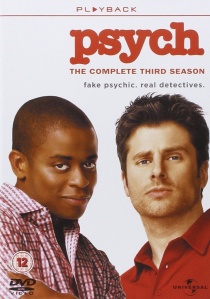 With half of his colleagues convinced he is a psychic, James Roday returns as Shawn Spencer, following in his father's footsteps with a career in law enforcement that is only made successful through a combination of blind luck and 'heightened observational skills', a combination he is more than happy to let them believe in. But despite his success rate, Spencer still has plenty of enemies in the force who doubt his abilities or simply dislike him!

Psych: Season 3 also sees Dulé Hill (The West Wing) return as Shawn's best friend and reluctant sidekick Gus, and Corbin Bernsen as Shawn's disapproving father Henry, who ironically was the one who honed his son's 'observation' skills as a child. In addition, Psych: Season 3 also sees an extra special guest appearance from Jane Lynch, fresh from her huge success as Coach Sue Sylvester in Glee. Lynch pops up in episode six of this series, starring as Commander Barbara Dunlap, the latest thorn in Shawn and Gus' side and delivers yet another brilliant performance!

With another 16 episodes of comedy drama packed into this DVD box set, American crime drama fans are in for a treat, especially with extra features including audio and video commentaries, a brilliant gag reel and a selection of deleted scenes, everything any self-respecting Psych fan could be looking for!