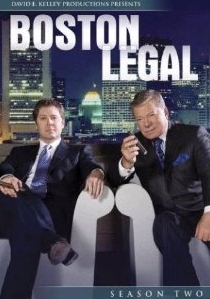 Join the team at Crane, Poole and Schmidt for another thrilling caseload, when Boston Legal: Season 2 is released to buy on DVD on 5th March 2007 from Twentieth Century Fox Home Entertainment.

Boston Legal is the Emmy® award-winning show starring William Shatner and James Spader alongside one of TV's most dazzling ensemble casts. Following a team of lawyers as they are confronted by moral and social issues, the Boston Legal cases continually stretch the boundaries of the law.

The resident bad boys of the firm - Senior Partner Denny Crane (Shatner, Star Trek) and maverick attorney Alan Shore - (Spader, The Practice) continue to enthral as they combine unabashed sexism and political incorrectness with a passion for justice and courtroom theatrics.

Boston Legal Season 2 is released as a seven disc box-set, containing all seventeen episodes from the second season. Special features include featurettes on the look and feel of Boston Legal.

BD
Will Smith and Martin Lawrence are back on the case in the roles that launched the dynamic duo to global superstardom in Bad Boys For Life, arriving on DVD, Blu-ray and 4K UHD 25th May 2020 from Sony ... END_OF_DOCUMENT_TOKEN_TO_BE_REPLACED
Hot PicksView