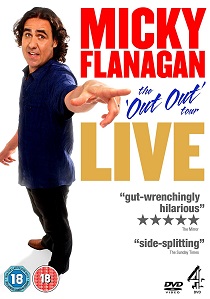 Critically-acclaimed comedian Micky Flanagan presents the highly-anticipated debut DVD of his sell-out nationwide Out, Out tour with Micky Flanagan Live available to own on DVD on 14th November 2011 from 4DVD.

Following a much-lauded performance on the Royal Variety Show in 2010, Micky Flanagan has burst into the spotlight this year after over a decade on the UK's comedy circuit. The hottest property in comedy right now, the former Billingsgate fish porter has become a regular face on a whole host of comedy TV shows including Mock The Week, Michael McIntyre's Comedy Roadshow, 8 out 10 Cats, Marriage Ref and Channel 4's Comedy Gala - and now a regular panellist on the primetime Saturday evening show Epic Win. His nationwide Out, Out tour was an unprecedented success, selling out across the country and his forthcoming West End run has already broken records, becoming the theatre's fastest-selling comedy ticket since Eddie Izzards last live show four years ago!

Micky's tale is one of a working class boy "made good". An up-bringing on an East London council estate followed by a university education transformed Micky into that rare delight - an intellectual cockney! In Micky Flanagan Live, Micky recounts stories from a working class upbringing where alphabetti spaghetti was a luxury, and sees him explore the hilarity of the unspoken social codes that govern the middle class society he now finds himself in. Taking in its stride the infamous "out, out" routine and Micky's hilarious "chicken children" encounters, Micky Flanagan Live is the perfect plain-talking antidote to the ridiculousness of modern-day life.

The DVD is packed with exclusive never-before-seen extras content, including Let's Go Down To The Pub in which Micky takes us on a tour of his east London home town; offering an insight to the people and places that went on to inspire so much of Micky's hilarious stories before ending up at his local for a proper chinwag. Offering a truly personal insight to his colourful upbringing in Meet My Mum & Dad Micky introduces us to the very people that helped shape the Micky we see today - his parents!

Appealing to the young and old alike through good old fashioned observational humour and no-holds-barred delivery, Micky Flanagan is a force to be reckoned with. With remaining tour dates quickly selling out, Micky Flanagan Live on DVD will be the only chance to catch this comedy hero live in your living room...

UHD
Phil Lord and Christopher Miller, the creative minds behind The Lego Movie and 21 Jump Street, bring their unique sensibilities to a fresh version of a different Spider-Man Universe with Spider-Man: ... END_OF_DOCUMENT_TOKEN_TO_BE_REPLACED
Hot PicksView