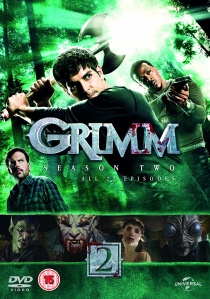 Re-discover an entirely secret world exposed by a dark family legacy, as the delicate balance between mankind and monsters continues to waiver, in Grimm - Season 2 released on Blu-ray and DVD on 28th October 2013, from Universal Pictures (UK).

Watch's popular fantasy drama returns with another action-packed new series, from the Producers of Buffy the Vampire Slayer and Angel and the Writer of the National Treasure trilogy.

The supernatural and mythological under-world rips away at the fabric of reality in this fantasy crime drama, as one Portland homicide detective must fight the killers that only he can see. Plagued by his supernatural lineage, Nick (Giuntoli) must battle the fantastical creatures of German story-telling ('Wesen') that wear a human face, whilst fighting to keep his secret from the people he loves the most. This season, as our hero finally comes to terms with his power and identity, he must tackle yet more gruesome and bizarre crimes committed by universally renowned and dangerously misunderstood creatures of ancient lore. Follow your favourite enigmatic characters on a journey through super-human amnesia, fatal potions, deadly plagues, child abductions and even UFOs!

The battle continues as Grimm - Season 2 arrives on Blu-Ray and DVD on 28th October 2013.

DVD
Doctor Strange teams up with a mysterious teenage girl from his dreams who can travel across multiverses in Doctor Strange in the Multiverse of Madness, released on DVD, Blu-ray and 4K UHD 18th July 2022 from ... END_OF_DOCUMENT_TOKEN_TO_BE_REPLACED
Top PicksView