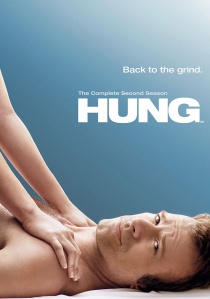 'Back to the grind' takes on a whole new meaning on 17th October 2011 as Hung: The Complete Second Season arrives on DVD from HBO Home Entertainment. The darkly comedic series returns as Ray's attempts to achieve a balance between his burgeoning career as a gigolo and a normal life are hampered by his two female pimps.

The 10 episode, two disc collection comes loaded with special features including 'Hung: Inside the Series' a look behind the scenes into its making, deleted scenes and five audio commentaries with each episode writers and the series creators.

With the help of friend and former conquest Tanya (Jane Adams - Eternal Sunshine of the Spotless Mind), Ray decided to turn his largest asset into an opportunity to make money and the pair began their careers as 'Happiness Consultants'.

Life is still hard for Ray in Season Two of the hit HBO noir comedy series as Hung continues the exploits of divorced gigolo Drecker on his quest to provide the ultimate customer satisfaction to women everywhere. His two feuding female pimps Tanya and Lenore (Rebecca Creskoff - Justified) face off in a hilarious battle to see who can most maximise Ray's growth and take sole responsibility for his career trajectory.

Broadcast in the UK on More4 and Channel 4, this critically acclaimed and thoughtfully crafted comedy drama is smart and edgy and shows HBO at the forefront of the social agenda. Innovative and coined as recession programming, the series looks at the lengths we go to in an economic downturn to keep our heads above water, in both a sensitive, yet highly entertaining way.

DVD
For the first time in the cinematic history of Spider-Man, our friendly neighborhood hero's identity is revealed in Spider-Man: No Way Home, released on DVD, Blu-ray and 4K UHD 4th April 2022 from Sony Pictures Home ... END_OF_DOCUMENT_TOKEN_TO_BE_REPLACED
Top PicksView