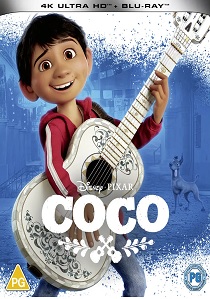 Coco, the story of a 12-year-old aspiring musician's extraordinary journey to the magical land of his ancestors, won a 2018 Golden Globe Award for Best Animated Motion Picture, became the highest grossing film of all time in Mexico, broke records in China and earned widespread praise, receiving 96 percent from critics and 97 percent from audiences on Rotten Tomatoes.

In Disney-Pixar's Coco, Pixar Animation Studios' 19th feature film, Miguel (voice of newcomer Anthony Gonzalez) dreams of becoming an accomplished musician like his idol Ernesto de la Cruz (voice of Benjamin Bratt)-despite his family's baffling generations-old ban on music. Desperate to prove his talent, Miguel finds himself in the stunning and colourful Land of the Dead following a mysterious chain of events. Along the way, he meets charming trickster Héctor (voice of Gael García Bernal), and together, they set off on an extraordinary journey to unlock the real story behind Miguel's family history.

The voice cast of Coco includes characters from the Land of the Living and the Land of the Dead. From the Land of the Living, Anthony Gonzalez (Ice Box, TNT's The Last Ship) lends his voice to Miguel, Renée Victor (Weeds, The Apostle) provides the authoritative voice of Abuelita, and Jaime Camil (CW's Jane the Virgin, Disney Junior's Elena of Avalor, The Secret Lives of Pets) is the voice of Papá. Lombardo Boyar (Happy Feet, TNT's Murder in the First) voices a town mariachi, and Ana Ofelia Murguía is the voice of Miguel's cherished great-grandmother Mamá Coco. Sofía Espinosa (Gloria) provides the voice of Miguel's loving Mamá, and Luis Valdez (Which Way Is Up, director La Bamba and The Cisco Kid) lends his voice to Tío Berto, Miguel's hardworking uncle.

HotDVDBD
An impending apocalypse raises the stakes and shatters the boundaries of time and space in Marvel's Agents of S.H.I.E.L.D. - The Complete Fifth Season, arriving on DVD and Blu-ray 1st ... END_OF_DOCUMENT_TOKEN_TO_BE_REPLACED
Top PicksView