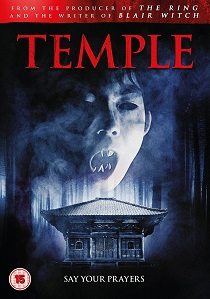 The latest from the writer of Blair Witch, The Guest and V/H/S, Temple is a frightening horror steeped in Japanese folklore.

After locals in a northern Japanese village discover a body horribly disfigured by injuries that make identification impossible, it's down to them to piece together found footage captured by a group of young Americans who were believed to be lost in a remote temple that's a focal point of superstition.

As they begin to discover the truth, however, the mystery as to the whereabouts of these missing tourists becomes increasingly chilling.

HotDVDBDDIGITAL
With stunning revelations, glamorous journeys, and the arrival of the Jazz Age, Downton Abbey: A New Era, released on DVD and Blu-ray 15th August 2022 from Warner Home Video, will be the Crawleys' biggest adventure yet as they grapple with their future and new intrigue about ... END_OF_DOCUMENT_TOKEN_TO_BE_REPLACED
Top PicksView