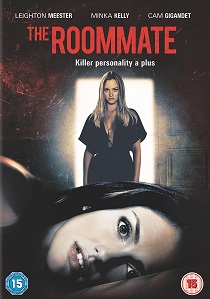 Sony Pictures Home Entertainment terrifying new thriller The Roommate, debuts on Blu-ray and DVD on 19th September 2011. Leighton Meester (TV's Gossip Girl, Country Strong) leads a hot young cast, including Minka Kelly (TV's Friday Night Lights), Cam Gigandet (Burlesque, Priest) and Aly Michalka (TV's Hellcats, Easy A), in this spine-tingling tale of a co-ed (Kelly) who becomes the deadly obsession of her new roommate (Meester). Directed by Christian E. Christiansen, The Roommate is a taut thriller full of nail-biting suspense and shocking twists that has audiences on the edge of their seats. Now, the terror moves in on Blu-ray and DVD, featuring hours of killer bonus features!

Bonus features on the Blu-ray and DVD include Commentary with Director Christian E. Christiansen, Alternate Opening Sequence and Deleted Scenes. Additional features Obsession: The Making of The Roommate, highlighting the development, casting and production of the film; The Roommate: Next Generation of Stars, featuring interviews with the film's cast of rising stars; and Dressing Dangerously, focusing on the film's unique fashions. Exclusively available on The Roommate Blu-ray is the BD-LiveT enabled movieIQ®, which allows viewers to access live trivia information about the movie's cast, crew, music while watching the movie.

She's cute. She's loyal. She's psychotic. And, unfortunately for college freshman Sara (Kelly), she's her new roommate. When Sara arrives at school, she finds new romance with Stephen (Gigandet) and forms a fast friendship with her roommate Rebecca (Meester). What begins as camaraderie soon turns creepy and Sara comes face-to-face with the terrifying realization that her new best friend is obsessive, unbalanced...and maybe even a killer!

HotDVDBDUHD
Released on DVD, Blu-ray and 4K UHD 16th September 2019 from Lionsgate Home Entertainment, super-assassin John Wick is back and on the run after killing a member of the international assassin's guild, and with a $14 million price tag on his head - he is the target of hit men ... END_OF_DOCUMENT_TOKEN_TO_BE_REPLACED
Top PicksView