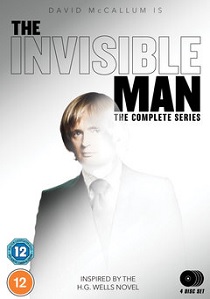 The Invisible Man: The Complete Series (1975)

Dr. Daniel Westin (David McCallum; Colditz, The Great Escape, The Man From U.N.C.L.E), working as a leading scientist at a U.S think-tank, discovers that the government intends to use his newly created invisibility formula for unspeakable deeds.

With determination and perhaps not enough foresight, he renders himself invisible and destroys the only batch ever created and quite possibly any hope of ever returning to human form.

Aided by his wife and a few remaining allies, Dr. Westin becomes a crime-fighting agent bent on, not only protecting the world but finding a cure for his curse of invisibility.

Containing all 13 episodes including the pilot episode, The Invisible Man is released on DVD and Blu-ray 1st August 2022 from Fabulous Films.