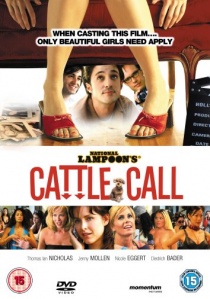 National Lampoon presents Cattle Call, a down and dirty casting-couch comedy crammed with girls, gags and gaffes set for a DVD release on 14th July 2008 courtesy of Momentum Pictures. It revolves around the frustrations of a man (Thomas Ian Nicholas - American Pie) who goes to unusual - but laugh-out-loud lengths - to find a woman worth having!

Packed with pin-up perfect women who take their fate lying down - and loaded with laughs - this is an hilarious, raunchy teen comedy, ideal for the lads. The film also features stars from American Pie, Balls of Fire, Reno 911: Miami and Baywatch.

Here's how the story goes: Ritchie Ray seems to have it all - he's a wealthy successful businessman, president of internet dating service PerfectForMe.com, no less. But while Ritchie's professional life is all about creating the perfect match, in his personal life he ironically suffers from continual 'unsuccessful dating exhaustion'.

So with his best friend, Ritchie decides to start a fake casting agency and makes a desperate attempt (well, many attempts) to find the perfect woman. However with a trail of stalkers, strippers and nymphomaniacs, the path to true perfection is far from easy...